Today I'm on the Blog Tour for Sight Unseen (A Sarah Sutherland Thriller) *by Sandra Ireland. I found the story absolutely riveting and can't wait until the next one in the series. I received an ARC free of charge to enable me to take part in the Blog Tour. 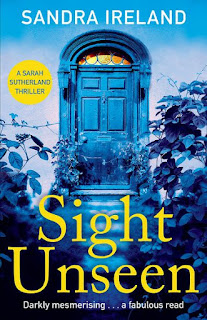 1648. Alie Gowdie marries Richard Webster during a turbulent time in Scotland’s history. Charles I is about to lose his head, and little does Alie know that she too will meet a grisly end within the year.

2019. Sarah Sutherland is struggling to cope with the demands of her day job, caring for her elderly father and keeping tabs on her backpacking daughter. She wanted to be an archaeologist, but now in her forties, she is divorced, alone, and there seems to be no respite, no glimmer of excitement on the horizon. However, she does have a special affinity with the Kilgour Witch, Alie Gowdie, who lived in Sarah’s cottage until her execution in 1648, and Sarah likes nothing better than to retreat into a world of sorcery, spells and religious fanaticism.

Her stories delight tourists as she leads them along the cobbled streets of her home town, but what really lies behind the tale of Alie Gowdie, the Kilgour Witch? Can Sarah uncover the truth in order to right a centuries-old wrong? And what else might modern-day Kilgour be hiding, just out of sight?

Sandra Ireland was awarded a Carnegie-Cameron scholarship to study for an MLitt in Writing Practice and Study at the University of Dundee, graduating with a distinction in 2014. Her work has appeared in various publications and women's magazines. She is the author of Beneath the Skin (2016), Bone Deep (2018) and The Unmaking of Ellie Rook (2019). She lives in Carnoustie, Scotland.


I loved this first book in a new series featuring Sarah Sutherland, a divorced woman in her 40s who just hasn't enough hours in the day, spending it either working as Manager of the local supermarket, caring for her elderly dad or worrying about her backpacking daughter who's off on her travels.

Sarah has a huge interest in history and the supposed witch, Alie Gowdie who lived in her cottage. She also takes tourists on witch tours on the streets of small town Kilgour, pointing out places of interest while weaving in stories of Alie Gowdie and other happenings at that time.

Her dad is seeing what seems like ghosts in his house but he doesn't want to bother his daughter and instead tells his new carer, Grant whom Sarah seems to know. Sarah finds herself forming an unlikely friendship with Grant.

I raced through the story and found that the cliffhangers at the end made me want more. Roll on book #2. A fantastic start to a new series. I'd highly recommend.
Posted by Beauty Balm at Sunday, August 16, 2020