I received an ARC* free of charge in order to take part in the Blog Tour for The Strange Book of Jacob Boyce by Tom Gillespie. 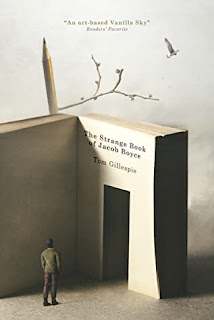 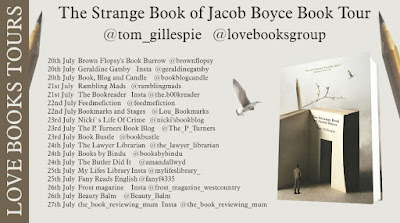 A spiraling obsession. A missing wife. A terrifying secret. Will he find her before it’s too late?

When Dr Jacob Boyce’s wife goes missing, the police put it down to a simple marital dispute. Jacob, however, fears something darker. Following her trail to Spain, he becomes convinced that Ella’s disappearance is tied to a mysterious painting whose hidden geometric and numerical riddles he’s been obsessively trying to solve for months. Obscure, hallucinogenic clues, and bizarre, larger-than-life characters, guide an increasingly unhinged Jacob through a nightmarish Spanish landscape to an art forger’s studio in Madrid, where he comes face-to-face with a centuries-old horror, and the terrifying, mind-bending, truth about his wife.

Tom Gillespie grew up in a small town just outside Glasgow. After completing a Masters in English at Glasgow University, he spent the next ten years pursuing a musical career as a singer/songwriter, playing, recording and touring the UK and Europe with his band. He now lives in Bath with his wife, daughter and hyper-neurotic cat, where he works at the university as an English lecturer. Tom writes long and short stories. His stories have appeared in many magazines, journals and e-zines. He is co-author of Glass Work Humans-an anthology of stories and poems, published by Valley Press. Visit Tom at tom-gillespie.com
Buy Link
https://amzn.to/2zspp0N

This book grabbed me, shook me and didn't left me go until I turned that very last page. There are two stories running throughout the book which interweave, interlap and which are very similar but not the same and I wondered if some of the connections were really happening or if they were all in my mind..

Dr Jacob Boyce works at the Glasgow University and his field is Earth Sciences. He's obsessed with a painting in the City Gallery which is entitled La Perde de L'Innocence – The Loss of Innocence which is in the style of Velanzquez, Spain's most celebrated artist. He asks for a sabbatical which his boss instantly turns down. He neglects his students and wife, Ella as his obsession takes hold. He's determined to unlock the painting's secrets and decipher it's code.

His wife Ella just doesn't understand his obsession with the painting and why he's skiving off work so much. She feels neglected and angry and one night he comes home to find his wife gone...

Who is Jude and why does she keep coming into his life. What is the significance of the triangle he keeps seeing everywhere? He decides to go to Spain to try and trace his wife and starts at his mother-in-law's holiday home. Some strange things happen which set him off on another tangent and a mad dash to Barca where things seem to go from bad to worse...

The story then flips on its head and he's back in Glasgow and you wonder was he really in Spain at all... An absolutely mind blowing read which I'm still thinking about now. Would highly recommend.
Posted by Beauty Balm at Sunday, July 26, 2020