Today I'm on the blog tour for ICE LAKE (Harry Cull Thriller #1) by John A Lenahan*. You can see all the other bloggers taking part on the poster below: 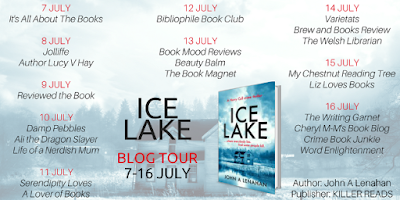 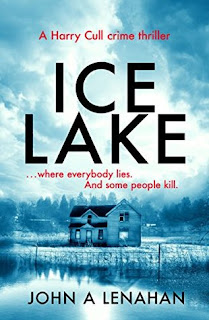 "…WHERE EVERYBODY LIES. AND SOME PEOPLE KILL…
An electrifying debut crime novel and the first in a new series featuring psychologist Harry Cull. Perfect for fans of Stuart MacBride, Mark Billingham and Peter May.
AN ABANDONDED BODY
Deep in the woods of Northeastern Pennsylvania, the body of a man is found – shot three times, dumped under the trees where the local kids will find him.


A HAUNTED PSYCHOLOGIST
Psychologist Harry Cull, tormented by his past, arrives in the picturesque town of Ice Lake to help with the murder investigation. There he unravels a web of lies and deceit that leads to the dark heart of a community torn apart by fracking, drugs and murder.


A DESPERATE KILLER
It’s not long before the second corpse turns up, this time a lawyer left for dead in the forest, and Harry finds himself on the trail of a twisted killer – who will do anything to keep the town’s darkest secrets buried".

I especially liked some of the characters in the story (and hope to see them in book #2!) and the humour laced throughout the book made me giggle.

A body is found in the forest in Northeastern Pennsylvania shot 3 times. State Trooper Eric Cirba decides he needs some help with the investigation and invites Psychologist Harry Cull (whom he met at a conference in Vegas) to join the team. He's good at finding out the truth with the help of his trusty lie detector machine.

I instantly liked Harry who is tormented by his past (we find out more about this as the book progresses) and MK, his attractive female neighbour at the lake who's not afraid to speak her mind. I also liked gossip Todd who runs the local store.

When a second body is found the team realise that the two deaths are connected. The story also deals with serious issues like drugs and fracking and has some factual and historical information at the start of each chapter which I found interesting.

I thoroughly enjoyed the story and the characters within it and am now really looking forward to the second in the series (oh and I didn't guess who the killer was!)