*gifted e-copy Today I'm on the blog tour for the fab Breakers by Doug Johnstone. 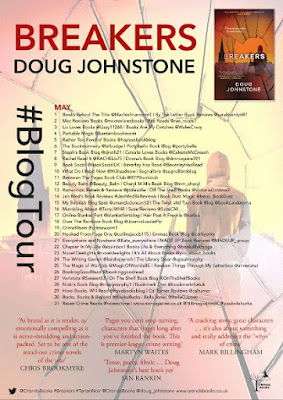 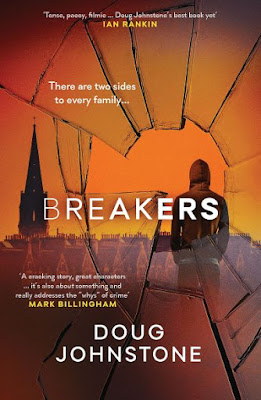 Seventeen-year-old Tyler lives in one of Edinburgh’s most deprived areas. Coerced into robbing rich people’s homes by his bullying older siblings, he’s also trying to care for his little sister and his drug-addict mum.On a job, his brother Barry stabs a homeowner and leaves her for dead, but that’s just the beginning of their nightmare, because the woman is the wife of Edinburgh’s biggest crime lord, Deke Holt.With the police and the Holts closing in, and his shattered family in devastating danger, Tyler meets posh girl Flick in another stranger’s house, and he thinks she may just be his salvation … unless he drags her down too.A pulsatingly tense psychological thriller, Breakers is also a breathtakingly brutal, beautiful and deeply moving story of a good kid in the wrong family, from one of Scotland’s finest crime writers.

The story is set in Edinburgh and Tyler lives with his addict mum and little sister Bean. They live in a tower block in a deprived part of the city. His nutter half brother and half sister live across the hall with their two vicious dogs. Barry, is always out thieving and insists on taking Tyler on his burgling sprees.

One night, it all goes pear shaped when a homeowner returns in the midst of their break in and things happen in the heat of the moment. Barry tries to laugh it off but Tyler knows what happened was wrong and calls for an ambulance anonymously. Later on they find out exactly "whose" house they tried to burgle and they know things are not going to end well..

Tyler randomly meets posh girl, Flick whom he immediately clicks with and they become friends despite their different backgrounds and lives. The Detective assigned to the case tries to pally up to Tyler saying she'll help him (and Bean) if he helps her...

A fast paced read which I found very easy to read and it was always oh just one more chapter. I love reading books which are set in the city in which I live in and found myself totally immersed in this gritty story. Would highly recommend.
Posted by Beauty Balm at Sunday, May 12, 2019