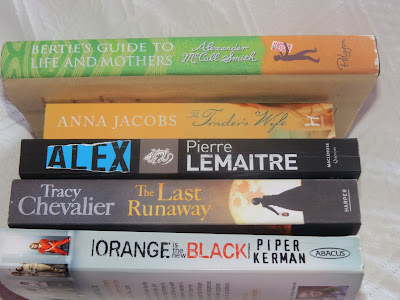 Bertie's Guide to Life and Mothers by Alexander McCall Smith - the latest slice of Bertie's life, he is excited about turning seven but wishes he was eighteen so he could get away from his overbearing mother Irene. The book features all the usual suspects - Ranald, Tofu, Olive, Big Lou, Matthew, Pat, Angus, Domenica and Cyril, Bruce and Stuart, Bertie's long suffering father - as ever a brilliant read. Roll on the next one.

Trader's Wife by Anna Jacobs - the first part in a trilogy. Singapore in the 1860s, Isabella a penniless Englishwoman who has recently lost her mother. She is unable to obtain a Governesses job and Singapore merchant, Mr Lee offers her a job to teach him English.  A couple of years later he marries her off to trader Bram and they set sail to Australia and a new life.  Super easy reading. Will probably pick up the other parts at some point.

Alex by Pierre Lemaitre - Alex is kidnapped by a stranger and taken away in a white van.  Commandant Camille Verhoeven and his detectives have nothing to go on - no suspect and no lead.  This is a great book full of lots of twists and turns and I didn't really see some things coming.

The Last Runaway by Tracy Chevalier - Honor Bright is a Quaker who has never really left 1850s Dorset until she decides to emigrate to America with her sister (who is to be married). At the farm with the family she finally ends up living with she secretly helps runaway slaves.  A great read.

Orange is the New Black by Piper Kerman - a fascinating read. Piper got mixed up with drug runners during a rebellious stage in her life and delivered a suitcase of drug money to Europe. Ten years on her past catches up with her and she is convicted and sentenced to fifteen months in a women's jail in Connecticut.  You learn about what it's like doing time and meet the wide variety of women she spends these months with. (comedy/drama based on the book available on Netflix).

What have you been reading this month?
Posted by Beauty Balm at Wednesday, October 30, 2013