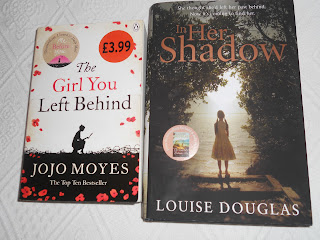 The Girl you Left Behind by Jojo Moyes - I adored Me before You which I read in February.  This latest book from Jojo Moyes is about the lives of two women, Sophie and Liv.  Sophie's husband Edouard is fighting at the front and Sophie and her sister have been ordered to serve the German Officers at her hotel each evening.  The Kommandant becomes obsessed with a painting that Edouard has painted of her which hangs in the hotel.  Almost a century later Sophie's portait hangs in Liv Halston's home, a wedding present from her husband before he died.

"A chance encounter reveals the painting's truth worth and its troubled history.  A history that is about to resurface and turn Liv's life upside down all over again..".

Edouard's family start looking for the missing art work much of which was looted illegally during the war and a court battle looms.  Liv doesn't want to give up the painting which has been part of her live for so long and her husband's last gift to her.  I couldn't put this book down although I slightly preferred Sophie's part of the story.  A great read though.

In Her Shadow by Louise Douglas - Hannah Brown thinks she glimpses her old friend, Ellen Brecht one morning at work.  But Ellen is dead.  She narrates to us her past, her breakdown, her friendship with Ellen and Jago, their carefree summers in Cornwall before they started to grow up and this is interspersed with the current day.  It has a twist at the end I wasn't expecting.  A great read.